Background: To determine if there is a difference in the quantity of microbial flora of the conjunctiva in individuals practicing head submersion (“dunk”) versus no head submersion (“no-dunk”) during hot tub use.

Methods: In this double-blind randomized clinical trial, healthy volunteers aged ≥ 18 years were recruited. Participants were randomized to head submersion versus no head submersion during a 15-minute hot tub soak. Study personnel, masked to the dunk or no-dunk group assignment, obtained conjunctival cultures before and immediately after hot tub use. De-identified specimens were submitted to the clinical microbiology laboratory for culture and analysis. The main outcome measure was the difference in the quantity of organisms cultured from the conjunctiva before and after hot tub exposure, as determined using a defined ordinal scale. A two-tailed Student’s t-test was performed to compare the total microbial colony counts between the two arms. Simpson’s diversity was used to measure the changes in organism diversity between the arms.

Results: Of 36 enrolled subjects, 19 were randomly assigned to the dunk and 17 were assigned to the no-dunk groups. Water samples obtained from all hot tubs were culture negative. Eleven of 19 eyes (58%) from the dunk group and eight of 17 eyes (47%) from the no-dunk group had negative conjunctival bacterial cultures before and after hot tub exposure. However, six of 19 eyes (32%) and four of 17 eyes (24%) of the dunk and no-dunk groups, respectively, were culture-positive after, but not before hot tub exposure. The quantity of organisms before and after hot tub exposure was not significantly different between the two arms (P = 0.12). However, the dunk group only showed a small increase in the quantity of organisms after as compared to before hot tub use (P = 0.03). None of the samples from subjects or hot tubs were culture-positive for Acanthamoeba.

Conclusion: Head submersion in a public hot tubs during a 15-minute soak does not appear to change conjunctival flora, as determined by culture plate yield. 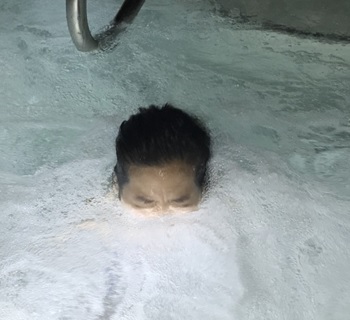