Background: This study aimed to investigate retinal imaging biomarkers, such as disorganization of the retinal inner layers (DRIL) and/or ellipsoid zone (EZ) disruption by spectral domain optical coherence tomography (SD-OCT), and functional outcomes in eyes treated with 0.2 µg/day of a fluocinolone acetonide intravitreal implant (FAc) after an insufficient response to previous treatments.
Methods: This was a retrospective comparative study of 18 eyes (15 patients) with persistent and/or recurrent diabetic macular edema (DME) treated with FAc. Eyes were divided according to the number of prior intravitreal treatments: group 1 (n = 8) with less than or equal to 6 injections (early switch) and group 2 (n = 10) with > 6 injections (late switch). Outcomes included percentage of eyes with DRIL and/or EZ disruption at baseline and analysis of the best corrected visual acuity (BCVA) using ETDRS letters, central macular thickness (CMT), DRIL, and EZ disruption at the last observation.
Results: Group 2 revealed a significantly higher percentage of DRIL and/or EZ disruption than group 1 (P < 0.05). At the last observation, group 1 revealed a higher percentage of eyes achieving vision stability/improvement, gaining greater than or equal to15 letters, and achieving greater than or equal to 70 letters (P > 0.05 for all comparisons). The mean BCVA gain was 8.8 and 0.7 letters for groups 1 and 2 (P = 0.397). Both groups revealed a significant mean CMT reduction (>20% reduction from the baseline value), without a significant statistical difference between them (P = 0.749). After treatment, most eyes from both groups showed resolution of DRIL and EZ disruption.
Conclusions: Patients with DME presenting with a lower percentage of DRIL and/or EZ disruption at baseline had better functional outcomes, supporting the possible benefit of an early switch to FAc after insufficient response to previous treatments. Future randomized studies with a larger patient cohort are warranted to confirm our conclusions. 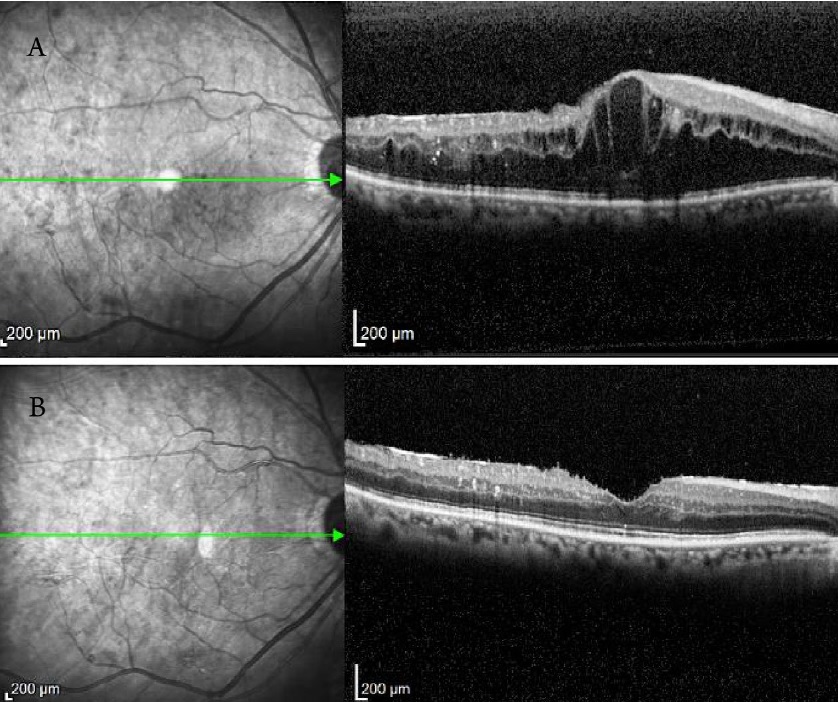